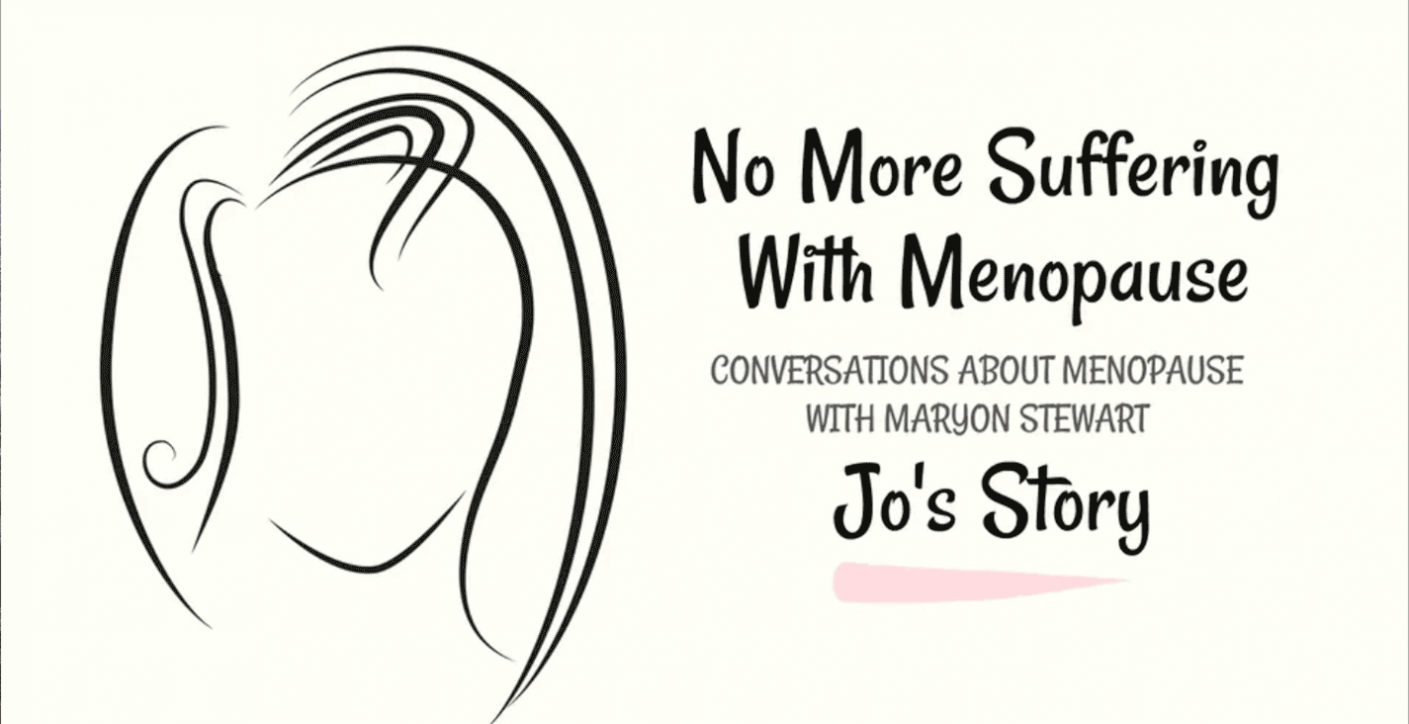 This week I’m introducing Professor Jo Brewis, a Professor of People and Organisations and works at The Open University Business School. She is also one of four researchers who co-authored the UK Government Report on working women that looked, among other things, at the impact of the menopause on careers. As Jo explained, “The workplace demographic is changing – the fastest growing group in the workplace is currently midlife women. Two friends of mine wrote a piece on this in an academic journal and described the menopause as a coming tsunami that industry simply isn’t prepared for.”

As well as focusing on menopause in her career, Jo was having a rough time with her own menopause. Her main problems were cognitive – struggling to access information that was stored away in the folds of her memory was one of the biggest issues. She also experienced other common menopause symptoms including fatigue and constipation, as well as acne on her chin which she found hugely embarrassing.  After following my Six-Week Natural Menopause Solution programme, Jo is symptom free and describes herself as “practically a new woman”.

Recently there was a 5-day series discussing the many aspects of menopause on BBC Breakfast. Menopause at work was discussed with experts saying employers need to do more to "normalise conversations" about the menopause in the workplace.

The BBC’s own survey found 70% of respondents did not tell their bosses they were experiencing symptoms.

Some firms have brought in menopause-specific policies but experts said for many it was still a taboo subject.

There’s no denying that menopause is tough, and for many women at midlife, they have to handle their difficult symptoms while working a full-time job[1]. Many women leave the workplace because of menopause which leaves industry bleeding from lost experienced talent.  After competing with men in the workplace for all of their working lives, it seems unthinkable that women are left to slide down a greasy pole during their menopause, losing their footing big time.

With this in mind, this week’s ‘Weekly Wisdom’ is about how to cope with menopausal symptoms in the workplace.

In my Real Cost of Menopause survey, I found that 84% of the women interviewed, equal to about 8 million working women in the UK, believe their productivity at work was reduced because of menopause. Meanwhile, 75% feel that their productivity is reduced for over a week every month, which equates to 280 million less productive work days per year in the UK.

Yet only 20% admitted to taking time off to deal with their symptoms. This means that day after day, millions of women are working through tension headaches, fatigue, depression, foggy memory, mood swings, and many other menopause symptoms without saying a word.

In the past, menopause was not on the corporate agenda, now more companies are implementing menopause policies.

I am aware that many women are still afraid to bring up the ‘M’ word in front of their managers or bosses, especially if they’re younger or male. It’s considered an embarrassing, taboo topic.  Moreover, women fear that their performance will be evaluated against a situation that occurs in the life of every woman over which they have little control.

Women shouldn't have to suffer without support.

As you will see in the interview with Jo she generally considers herself to be an extremely organised person, but menopause made her quite ditzy. She said, “I’d do daft things like get on the wrong train, forget the name of someone I’d known for years or struggle to follow a conversation because I’d suddenly drift off”.

“I’d reach for a word and it just wouldn’t be there, or come out with spoonerisms. As you can imagine, for someone working in academia this wasn’t a good look.”

“Every time I stand up in front of fellow academics, business groups or private organisations and present on the subject I see this dawning spread across the faces of so many women in the audiences,” says Jo. “And I know that what they’re thinking is ‘I’m not going mad, I’m menopausal’.

The Daily Mail article ‘The Other Glass Ceiling’ highlighted the plight that women have around the menopause in the workplace. As Jo says, “We have zero shame when it comes to talking about pregnancy and childbirth and legislation goes a long way towards protecting working women who want a family”.

“And yet there’s this terrible fear of saying you’re menopausal in case there’s an unspoken ‘oh yuk, she’s over the hill then response”.

Even though you shouldn’t feel as if you need to hide your symptoms, here are a few tips to help you deal with menopause at work…

The first thing you need to do is make sure you're having a wholesome diet and that you're eating little and often because unless you're supplying your body with nutrients you won’t be able to function or concentrate at work.

You need a constant supply of good nutrients going through to your brain and your nervous system to keep your hormones functioning normally, so skip the vending machine or the cafeteria and pack your own, nutrient-rich lunches.

Another thing that you can do to help yourself to control your symptoms is to do some regular relaxation[3], as this has been shown to reduce your hot flushes by as much as 50 or 60%. Those are the things that really embarrass us in the workplace because everyone can see that you're sweating and that you're going red in the face, so you want to try and deal with that as quickly as you can.

We can't always control the temperature in the workplace so it’s important to layer your clothing so that if you go into environments where you’re feeling hot or cold and others are not, you can easily peel them off without drawing attention to yourself. Sometimes after a flush you can get chilled so you need to be able to put on another layer.

6. Talk to your colleagues

Many women are afraid to bring up the ‘M’ word in front of their managers or bosses, especially if they’re younger or male. It’s considered an embarrassing, taboo topic, and women fear that their unavoidable situation will be linked to their performance.

However, you really do need to communicate to your manager and colleagues to let them know you’re going through a transition, just as you would if you were pregnant or having a bad day with your period. You have every right to have support in the workplace.

To find out more about what’s really going on in your body at the time of the menopause and how you can overcome symptoms without having to take HRT or any drugs join me at my next FREE Virtual Class.