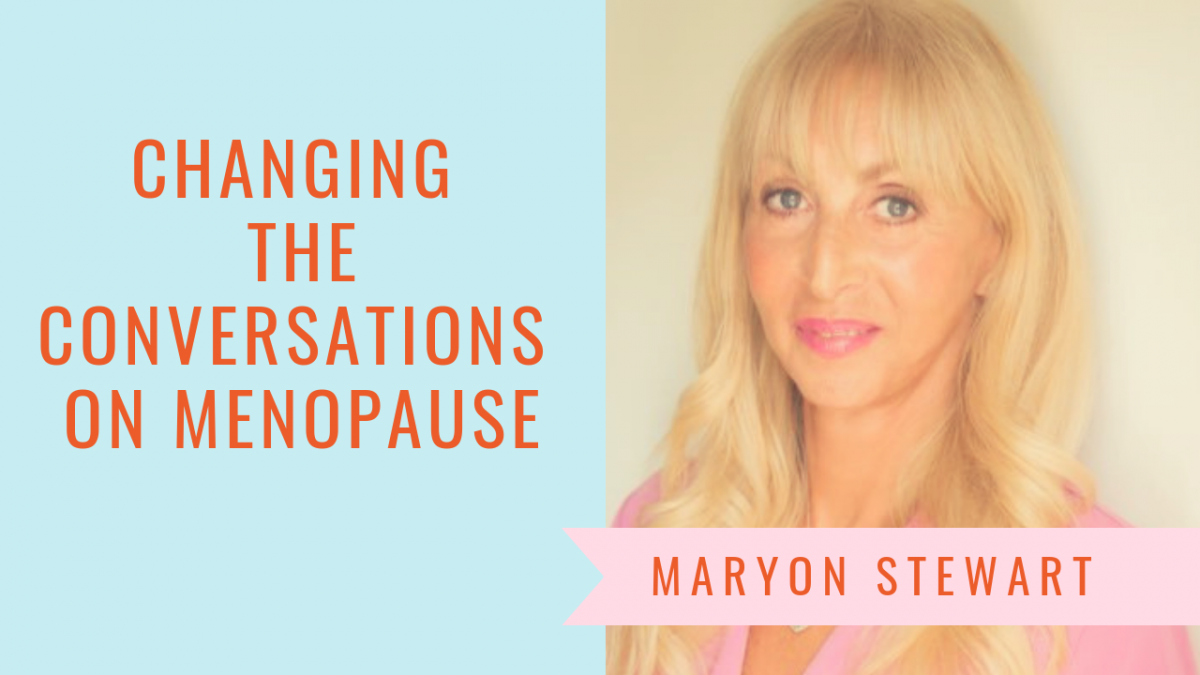 Imagine celebrating menopause as an achievement… It can, and should, be the beginning of a whole new satisfying chapter in our life, rather than feeling like the end of life as we knew it.  With accumulated professional and social skills, improving financial stability and increasing amounts of leisure time once children have flown the nest, women should be in celebration mode.  Why is it then that, in Western societies, celebration and menopause are hardly mentioned in the same conversation?

When young women see the first sign of menstrual blood, their mothers quietly celebrate their daughter’s arrival to womanhood.  Following the delivery of our new born babies, whole families and close friends share our joy. So, why then aren’t women expecting congratulations when they leave their fertile years behind and the prospect of being respected for their wisdom?  According to the results of my new survey of 1100 women, Changing the Conversation on Menopause, most women are far too scared by their overwhelming symptoms and fading youth; often their brain fog is so extreme they can’t even remember the last sentence they uttered, let alone remember their accumulated wisdom.

How did menopause get associated with so many negative connotations?  Well for a start, 100 years or so ago, women weren’t living much past fifty, so what happened after menopause wasn’t really an issue. Women fifty plus were considered old ladies. Now that we can expect to live so much longer, and both the Baby Boomers and the X Generation have no plans to grow old gracefully, we need to seriously revisit conversations we are both witnessing and taking part in on the subject of our menopause.

Conversations with your GP

Conversations in GP practices should be informative and helpful, rather than resulting in women being palmed off with prescriptions for hormones and antidepressants, or told it’s all part of being a woman.  In my new survey, would you believe under 12% of women even consider going to ask their doctor for help or advice about menopause? And only 2% consult their practice nurse.

Women are seriously afraid of owning up to being menopausal in the workplace.  Whilst some companies and organisations are now creating policies and practices for women at this life stage, in the majority of cases Line Managers feel under educated on menopause and find conversations with employees awkward.  Nearly half of the women in my new survey sample (46%) said they would be afraid to speak to their boss about menopause for fear of making them look less capable, and even more women (48%) said they would be too afraid to discuss it with their colleagues. When you think about how many years women compete with men for parity in the workplace, it’s beyond sad that they so often slide down a greasy pole at menopause. And some even leave the workplace as they are afraid of being pushed.

Personal relationships very often fracture at the time of menopause due to lack of open and honest communication.  The survey showed that 58% of the women were afraid to have a conversation with their partner either because they didn’t know what to say or for fear of placing additional strain on their relationship.  Last year, in another survey we conducted, many men told us they feel powerless, confused, and even rejected at the time of their partner’s menopause. They are hardly likely to start a conversation. And even if they did, women are mostly clueless about what’s going on in their body, so how could they explain it to anyone else?  The saddest thing is the lack of awareness by women that they can overcome their symptoms, reclaim their wellbeing and feel better than they can remember without even taking drugs or hormones. Plus, they can even reclaim their mojo.

With the combined effort of a group of dynamic and determined women (and they know who they are) we came a long way in the last year. Thanks to Henpicked’s Menopause in the Workplace for example, who specialise in creating best practice around menopause, many organisations including the Police Force are forging ahead with support for their female staff going through menopause.

And World Menopause Day was marked this year by Sherwood Forest, the first NHS Trust, offering help and support to women who have reached this stage in their life. That’s a massive landmark which, in my view, should be celebrated.

At the recent suggestion that women going through menopause should wear ‘M’ badges, there was an absolute outcry.  Tens of thousands of women shouted loudly that they definitely don’t want to be labelled. What they do want is adequate science-based knowledge so they may make informed choices about how they transition through menopause, for like pregnancy, it has a beginning and an end.

I can help you

I know from personal experience that a little knowledge can be life changing.  Plugging into research that has been shown to work can take a woman from feeling like she has lost sight of herself to having every right to feel hopeful.  My 5 month programme has helped over one hundred thousand women overcome their menopause symptoms in the last 27 years. In the last year, my 6 Week Boot Camp has educated women and helped hundreds of women see the light at the end of the long dark tunnel within a matter of weeks. My 14 day self help programme also now helps provide women with science-based tools so they can do a U turn at the time of menopause and reclaim their wellbeing.

Francesca is a typical example, and I hear stories like this all the time.  ‘I began feeling extremely anxious when I was 43. I couldn’t sleep and could feel my heart pumping in my chest and I couldn’t string a sentence together.  I felt scared and overwhelmed and would curl up in a ball, feeling too afraid to go out of the house. I honestly thought I was going to die. When I looked in the mirror I didn’t see me.  My hair, which was usually glossy and thick was lank and falling out, my nails were broken and short. I was totally unable to make decisions and felt like I was just existing.

The receptionist at my doctor’s surgery told me my tests showed I was going through the menopause.  I saw a gynaecologist who thought I should try to get through it by myself. I was relieved when I was referred to Maryon Stewart for some alternative help by my Reflexologist. Maryon wrote a programme for me that included making changes to my diet and lifestyle as well as taking some supplements that had been through clinical trials. Within the space of two months I felt like a different person.  I was sleeping again, my anxiety had gone and the brain fog lifted. My hair, skin and nails improved beyond belief and I begin to put on the weight I had lost. I was so impressed I decided to change my career and become a counsellor, specialising in supporting women going through the menopause’.

As my new survey shows that 96% of women don’t feel prepared for menopause, with well over two-thirds admitting to feeling completely unprepared and robbed of life as they knew it, in this coming year, I’m going to focus on educating them about natural solutions.  I believe that all women have a right to know about the sound medical research that will help them overcome their symptoms, enabling them to thrive and enjoy their mature years.

I’m kicking off with a series of free virtual menopause classes and I will be answering questions live.  It’s World Menopause month. Come and join me, invest some time in yourself because you are so worth it. Click on the link now to reserve your place.  I very much look forward to welcoming you and being part of your recovery journey