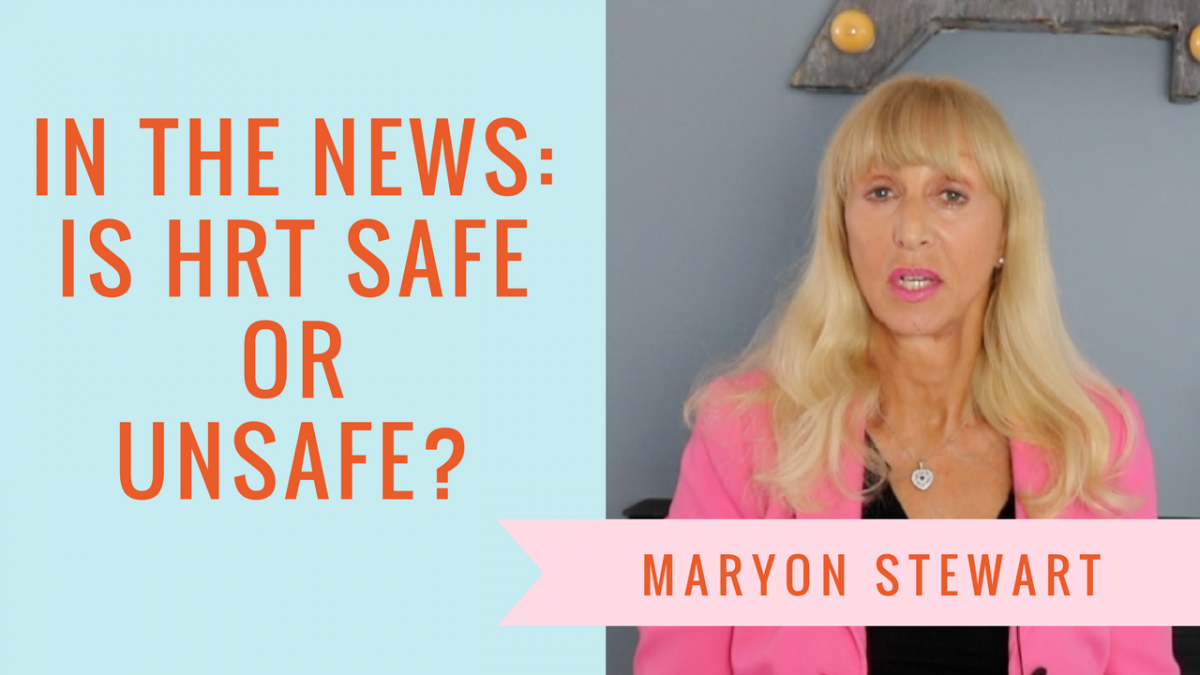 Having been successfully helping women all over the world to overcome their symptoms without having to resort to the use of drugs or hormones for over 25 years, my ears perked up this morning when I read the news that HRT is safely back on the menu. Call me cynical but I always get suspicious when research produces completely different findings to studies on millions of women that were previously published, which is what happened this week.

The new research published in the Journal of the American Medical Association found that women who take Hormone Replacement Therapy are at no greater risk of dying from heart disease or cancer than women who don’t take it.  On the surface of it, that would appear great news.  However, Professor Manson, who conducted the study, said that the risks of blood clots, stroke and breast cancer are all known to be increased by taking HRT.  She justifies her claim of the new found ‘safety’ of HRT by saying that HRT seemed to reduce fractures, diabetes and endometrial cancer which in her view counterbalances the number of life-threatening illnesses.

What hasn’t been taken into consideration is that there are many well researched natural ways to reduce fractures, diabetes, endometrial cancer and even improve both long and short-term memory as well as cognitive function.   Why then should women put themselves at increased risk of breast or endometrial cancer and osteoporosis when they could manage their menopause without taking hormones?  For example, The National Institute for Health and Care Excellence (NICE) has estimated that while normally about 22 women in every 1,000 get breast cancer over seven years, if they all took HRT there would be an extra five cases.

What the research also fails to discuss is that women often experience migraines when taking HRT and according to the study we conducted at the Natural Health Advisory Service on women taking HRT, there was an average of an 18lb weight gain within the first year.  When women are struggling with bulges around the middle, and self-esteem is at an all-time low at this tricky life stage, why would they want to take the risk of gaining even more weight?

The researcher also forgot to point out that in Appendix 8 of the latest NICE Guidelines, the complementary approach to menopause including diet, exercise, supplements and relaxation was shown to be a good cost effective first-line treatment approach.

I wondering if this study was funded by pharmaceutical industry who clearly have so much to gain.  It saddens me greatly that women are once again being lulled into a false sense of security without being given the full story.

Over ninety percent of my patients are symptom-free within five months after following a natural programme including the approaches found to be so useful by NICE.  Not only do women overcome their menopause symptoms, but the same approach also helps them to prevent heart disease, reduce the risk of stroke, dementia, diabetes and the bone-thinning disease osteoporosis in the longer term.  As many of us will be blessed with many more additional years, it’s important to know how to preserve our wellbeing in our mature years.

To find out more about what’s really going on in your body at the time of the menopause and how you can overcome symptoms without having to resort to drugs or hormones, join me at my next free Virtual Class.